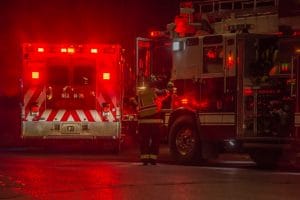 Just after midnight, a fire broke out on the 32nd floor of an apartment building in the Loop. The very good news is that no one died, and Chicago FD was able to put out the fire, without the need of evacuation, in an hour, according to ABC 7. Once again, our city’s finest showed up in force to help: about 150 firefighters answered the call, and 11 ambulances came to administer services.

Unfortunately, the residents did not escape unscathed. Three people went to the hospital in serious condition, ABC 7 reports, and three others suffered injuries from smoke inhalation, though they are reported to be in good condition.

What caused the blaze?

At this time, the fire is believed to be electrical in nature. No further information has been disclosed.

According to the U.S. Fire Administration, there were about 379,000 residential fires in 2018. Electrical malfunction accounted for 25,700 of them, making it the 4th leading cause of residential fires.

This apartment fire could have been much, much worse

It is a testament to Chicago FD that this blaze was put out quickly and effectively because it surely saved many more lives. Dep. District Chief John Giordano told NBC 5 News that “There was a lot of heat and smoke as you can imagine in a high-rise, which makes it challenging for the fire department.”

High-rise fires ARE a real challenge for firefighters, for many reasons:

While burn injuries are potentially the most severe injuries arising from a house fire, inhalation and suffocation can also cause long-term injuries. Respiratory distress can lead to oxygen deprivation, and inhalation of chemical retardants – along with smoke – can also lead to permanent injuries.

Furthermore, soot and ash within the walls post their own risks, as does mold; this is why it is critical to renovate any parts of the home that may have been soaked with water or chemicals, even if there was no actual fire damage. The detritus can stay within the walls and create an unsafe living condition.

We wish all six residents a safe and speedy recovery.