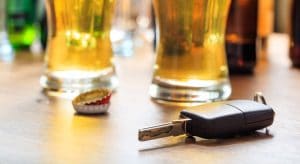 There was a story on the news on Thursday, April 21 about a fatal drunk driving accident in the 3400 block of South California Avenue in Chicago. Per ABC 7, a drunk driver was traveling at just under 80 mph on Monday morning (it was just after midnight) when she crashed into a median. The impact caused the drunk driver’s car to literally fly into the air. It collided with a sedan on the side of the road, shearing off the sedan’s roof and decapitating the driver.

It’s a horrific story, and our hearts go out to the family of the woman who was killed. But one of the details that stuck out was the drunk driver’s blood alcohol content (BAC): it was apparently a .183, which is more than double the legal limit of .08. According to the 2022 Illinois DUI Fact Book, the average DUI offender in Illinois has a BAC of .17 – again, just over twice the legal limit.

The average driver. That means when you add up all the BACs of drunk drivers and divide them by the number of drunk drivers (20,131 in Illinois 2020, and 5,425 in Cook County alone), you get an average of twice the legal limit. And that’s only when you use data from arrests. There are likely hundreds, if not thousands, of drunk drivers who get away with it every week.

Illinois has a problem.

The DUI Fact Book states that there were 1,195 crash fatalities in Illinois in 2020, and that 254 people died in alcohol-related crashes, so drunk driving is the cause of about 1 in 5 fatal accidents in our state.

Why does Illinois have so many drunk drivers?

We don’t know. Illinois in general experienced a spike in drunk driving fatalities at the beginning of the pandemic, but no one seems to have any concrete reasons about why the numbers have remained high.

To find out why people drive drunk in general, we had to go back to a 1995 article published by the National Highway Traffic Safety Administration (NHTSA), which did a small survey of “almost” 600 people who had recently driven while under the influence. The primary reason behind the decision to drive drunk was “Social and Environmental Influences.” Per the NHTSA:

Social and Environmental Influences were the largest category leading to alcohol impaired driving. These influences accounted for one third of all the decisions, and came from friends and the situations they helped to create….

The study found that the willingness to allow impaired friends to drive often arises from the need for a ride in the absence of an available designated driver. This can happen because the driver did not foresee the need for a designated driver in advance, there was no sober passenger present, or the other drinking passengers were unwilling to drive, even though less impaired. Some passengers are less concerned about their prospects of being injured as a passenger than about the possibility of being arrested as a drinking driver.

In short, the theory goes that people drive drunk because their friends encourage drunkenness. These theories are reflected in a 2006 article published by Arizona State University, which found:

Drunk driving is very much the result of a cultural norm that emphasizes drinking alcohol as a form of entertainment and driving as both transportation and entertainment. 27 Cultural drinking habits also shape drunk driving patterns. For example, drunk driving will be more concentrated on weekend nights in countries where such nights are considered prime time for heavy drinking. The extent of drunk driving also depends, obviously, on the availability of vehicles, so it is less likely in societies and communities where vehicles are prohibitively expensive.

How does Illinois compare to other states when it comes to drunk driving?

Illinois doesn’t even crack the Top 10 for states with the most recorded drunk drivers (and Chicago came in 26th for cities with the most number of DUI arrests) but we have some problems with this assessment because, again, this data only looks at people who have been arrested and/or convicted of drunk driving, not how many people actually drive drunk.

Back in 2017, the Illinois Criminal Justice Information Authority (ICJIA) noted that the overall number of DUI arrests in the state had been declining since 2008 – but that “Illinois residents self-reported a rate of 475 impaired driving incidents per 1,000 population.[29] This rate is markedly higher than the rate of individuals arrested for DUIs in Illinois (3.44 arrests per 1,000 population), suggesting most impaired driving goes undetected.” ICJIA also noted that the introduction of ridesharing services like Uber and Lyft led to a dip in DUI arrests, but that the decrease was not permanent; eventually, people started driving drunk again.

What are my rights if I’m injured by a drunk driver in Chicago?

If you or a loved one is injured in a collision with a drunk driver in Chicago, or if your loved one is killed by a drunk driver, you do have legal options. You can file a personal injury lawsuit against the driver (or the owner of the vehicle, if they are not the same person) to seek damages for your:

If your loved one dies, you can file a wrongful death claim for many of the same damages, plus costs for the burial and funeral.

One important thing to note is that drunk driving injury cases is that the drunk driver often faces criminal charges as well. Your civil case and the criminal case are separate, so even if the drunk driver manages to beat the charges, you can still file a claim or lawsuit to recoup damages. Often, the criminal process goes forward first, so you may have to wait until that is finished before you get justice. It’s excruciating, we know, but it’s how the system works.

Unlike other fatal accidents we’ve discussed, at least this time there will be justice: the drunk driver has already been charged with aggravated DUI causing death and reckless homicide. It’s a bittersweet silver lining, but it’s something. We hope the family finds the closure it deserves.

Gainsberg Law provides comprehensive counsel to injury victims in and around Chicago. If you were hurt in a drunk driving accident, we want to help. Please call 312-600-9585, or fill out our contact form to schedule a free consultation with an experienced Chicago drunk driving lawyer.