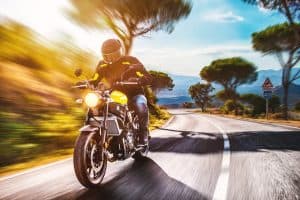 Riding a motorcycle is a cherished activity and pastime enjoyed by thousands in the U.S. Motorcycle riders enjoy both the relaxation and thrill of the open-air experience it provides. At the same time, it can also be dangerous and even deadly if certain dangers on the road are encountered. In 2016, 5,286 motorcyclists were killed, an increase of 5.1 percent from the previous year. When measured in vehicle miles traveled in 2016, deaths among motorcyclists happened 28 times more often than the death of passenger car occupants in vehicle crashes.

Tragic death of a motorcycle driver in Hanover Park

Driving home one evening from a shopping mall in Bloomingdale, Ramon Barajas, 84, turned left in front of Christina Jankowski, 30, who was enjoying a motorcycle ride that same evening. She collided with his vehicle and was instantly killed. However, Barajas was declared legally unfit to stand trial, and therefore not convicted of a crime. The presiding DuPage County Judge Jeffrey MacKay instead ordered Barajas to be monitored by the court while he resided in an assisted living facility.

The attorneys of Barajas asserted that due to his cognitive issues he was not able to appreciate he had been in a crash. However, the judge ruled that despite these issues, Barajas most likely knew he had been in a serious accident.

The judge made his determination based on a witness for the prosecution who said that Barajas, after the collision, slowed his car and stopped for roughly 20 seconds; that he also appeared to look at the scene behind him in his car mirrors, but left the scene after a police vehicle arrived.

The dangers motorcyclists encounter can be life-threatening

Due to the slim profile of a motorcycle and the lack of protection and exposure to the outside road and other objects that are also present, motorcyclists encounter greater risks on the road than occupants of enclosed passenger vehicles. Some of the dangers that can lead to a motorcycle crash include:

At Gainsberg Law, we understand the vulnerability motorcyclists face on the road every day. If you have been injured riding a motorcycle due to the negligence of another party, we can hold those responsible for your injuries liable and fight for the compensation you deserve. To set up free consultation about your case, call our Chicago law office today at 312-600-9585 or fill out our contact form.