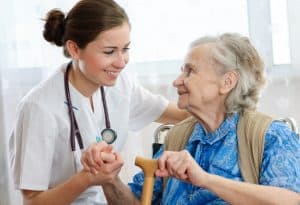 A family is suing a nursing home after their mother died following a fall in her nursing home. The woman, 87-year-old Fannye Doris Holden Scruggs Rorer was an amputee with only one eye who suffered from Alzheimer’s disease. She was a resident of Woodhaven Hall at Williamsburg Landing in Williamsburg, VA for five years. On April 15, 2016, a nurse attempted to move her from her bed using a hoyer lift. Ms. Rorer fell during the transfer and suffered two fractures to her spine. The nursing home declined to move Ms. Rorer to a hospital for treatment, instead keeping her onsite. Ms. Rorer died eight days later.

Nursing home abuse and negligence is not only tragic, but preventable. These facilities have a responsibility to keep your loved ones safe.

The lawsuit, as reported by Williamsburg Yorktown Daily, also alleges that Ms. Rorer was dropped an additional six times in the months leading up to her seventh and fatal fall. More, the suit notes that the nursing home had been cited during inspections in 2015 and 2016 (less than two months prior to Ms. Rorer’s fall). These citations include not notifying a resident’s doctor following a fall, as well as a lack of care plan for a resident following surgery.

Ms. Rorer died after a fall that resulted from a lone nurse attempting to move her using a hoyer lift. A hoyer lift is a hydraulic system that places a sling under a patient’s body to move them from a bed to a chair or wheelchair. Typically, it’s used for patients unable to move independently. It’s unclear what the specific care plan was for Ms. Rorer, but health care professionals generally agree that hoyer lifts require two people to operate. Some patients may be too heavy for one nurse to transfer safely, the patient could slip out of the device, or struggle to free themselves, or the device could tip over.

The plaintiffs in the case allege that Ms. Rorer should have been transferred by two nurses instead of one, especially in light of the fact that she had suffered six previous falls during lift transfers in a matter of months.

Falls during transfers should be preventable

Woodhaven Hall at Williamsburg Landing is an extremely small facility with an excellent reputation. It has only 15 beds and does not accept Medicaid. Over the five years during which Ms. Rorer was a resident, the family is said to have spent $600,000 for her care. Ms. Rorer’s family is suing for more than $2 million in damages.

Ms. Rorer’s death should be a reminder that even the most expensive nursing homes can still be negligent. One fall during a transfer should be unacceptable, but allowing a resident to fall seven times is almost incomprehensible. Did the facility have a policy in place that more than one nurse or resident is required for a transfer? Was there inadequate staffing or a failure to follow policy? The truth will come out eventually, but it’s difficult to imagine a legitimate reason why Ms. Rorer’s death occurred the way it did.

If you believe your loved one is suffering nursing home abuse or neglect, talk to the Chicago attorneys at Gainsberg Law today. We will aggressively fight for the rights of your family and hold the guilty parties responsible. Get in touch with us through our contact form, or by calling 312-600-9585 to schedule a consultation.