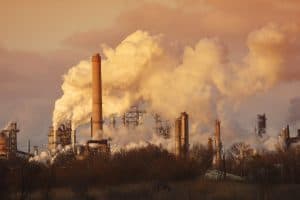 Since last fall when the Chicago Tribune first reported on the dangers of long-term cancer risk from toxic air pollution for residents who live near a Medline Industries in Waukegan and Vantage Specialty Chemicals in Gurnee, there has been growing concern about exposure to cancer-causing gas emissions.

A February 2019 Tribune article reports that these two companies are releasing the toxic gas into neighborhoods where nearly 42,000 people live. The Tribune story reports that the White House administration has brushed aside petitions from the members of the Illinois congressional delegation asking for the air quality near these Lake County facilities be monitored. Federal scientists have estimated that the areas surrounding these facilities face long-term cancer risk from toxic air pollution. Nothing has been done to keep Lake County residents informed, and the EPA’s website has not been updated since November 2018.

The Illinois EPA shut down the Willowbrook sterilization plant temporarily after high concentrations of ethylene oxide were detected near Sterigenics after two months of testing. Local residents are banding together and meeting with state legislators who are introducing measures that would outlaw ethylene oxide leaks, and another bill which would review state permits to ensure that they reflect scientific research that shows EtO is far more dangerous than previously thought. Legislators are also considering a ban on ethylene oxide sterilization.

Sen. Malinda Bush, chair of the Environment and Conservation Committee, said “We deserve to know if the air we are breathing is safe.” Bush is co-sponsoring the bi-partisan legislation with Sen. John Curran.

What is ethylene oxide?

Ethylene oxide (EtO) is an intermediate in the production of ethylene glycol, which is used to sterilize medical equipment and supplies. The Occupational Safety and Health Administration (OSHA) reports that EtO possesses several physical and health hazards, it is both flammable and highly reactive, and acute exposure to EtO gas may cause respiratory irritation and lung injury, headache, nausea, vomiting, diarrhea, shortness of breath and cyanosis. Chronic exposure, says OSHA, has been associated with the occurrence of cancer, reproductive effects, mutagenic changes, neurotoxicity and sensitization.

The Environmental Protection Agency (EPA) describes ethylene oxide as a flammable, colorless gas used to sterilize equipment such as medical equipment that cannot be sterilized by steam.

The Daily Herald reports that EtO testing will begin on June 1 near Vantage Specialty Chemicals in Gurnee and Medline Industries in Waukegan after the calls for action from the residents and lawmakers in those communities. The Herald story also reports that state health officials will conduct a cancer incidence assessment. Based on U.S. EPA recommendations, a vendor will be hired to collect air samples from four sites near Vantage and four sites near Medline and from two additional remote sites to provide information about background levels of EtO, which the U.S. EPA has classified as a human carcinogen.

Gurnee, IL is keeping its residents up-to-date on what is happening with the use of ethylene oxide in their community with a blog on the city website. It also contains a copy of the FAQs from the Illinois EPA website about ethylene oxide.

A story in the Patch.com reports that, “Neither facility has been accused of violating limitations on the amount of pollution they can emit, but U.S. Sen. Tammy Duckworth told the Tribune that only demonstrates regulations on ethylene oxide emissions are insufficient.”

Gainsberg Law encourages you to keep up-to-date on the latest information. If you have been hurt, please call us at 312-600-9585 or complete our contact form to talk to a Chicago personal injury lawyer today.