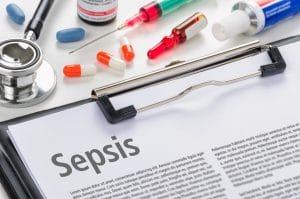 Surgery has inherent risks – risks patients should be informed of before they make their decision about whether to proceed. One of the more common, and more serious, risks is infection. As long as the infection is identified and treated, patients will (generally speaking) get better.

There is one specific infection, however, that is more dangerous than most. Septicemia, also known as blood poisoning, is an infection of the blood which started elsewhere in the body. Per Healthline, the most common conditions which lead to septicemia include:

How is septicemia different from sepsis?

Septicemia is an infection; sepsis is the inflammatory response to an infection. Unlike septicemia, which travels throughout the body, sepsis can develop from an infection in a localized area. The National Institutes of General Medical Sciences (NIGMS) reports that more than a million people in the U.S. will develop sepsis each year, and that 15% – 30% of patients will die as a result of it.

If your sepsis is diagnosed quickly and treated properly, you may not have any long-term effects. However, if you were immune-compromised, had an underlying medical condition, or if your diagnosis and/or treatment was delayed, you could be at risk of:

Medical negligence that leads to septicemia and its complications

Patients undergoing surgery have an increased chance of developing an infection in or around the surgical site, especially because many patients’ immune systems are already a bit weaker because of the underlying condition.

If a hospital fails to properly sterilize its tools and equipment, and fails to keep its operating rooms clean and sterile, it could be held liable if an infection spreads and puts your life at risk. The same may be true if the medical professionals fails to follow protocol for handwashing.

However, it is the failure to diagnose and treat an infection in a timely manner that often leads to septicemia and sepsis in a hospital setting. If this failure leads to your severe or permanent injuries, you can file a medical malpractice claim against the hospital and/or individual doctors, nurses, surgeons, and other staff whose failure caused you harm.

Gainsberg Law, P.C. fights on behalf of surgical patients whose infections were left untreated, and who developed life-altering injuries as a result. If medical negligence led to you or your loved one developing complications from septicemia, we want to help. To schedule a free consultation with an experienced Chicago medical malpractice attorney, please call 312-600-9585 or fill out our contact form.