Last night, a 21-year-old woman was crossing the road at W. Addison St. and N. Janssen Ave. when she was struck by a Hyundai Elantra, ABC 7 reports. She suffered serious injuries and the driver took off from the scene; police are still looking.

We are sending our best wishes to the victim, and we hope she makes a full recovery – but we are also incredibly frustrated that yet another hit-and-run accident has left someone injured. Residents in that part of Lakeview told ABC 7 that they often see drivers speeding through this particular intersection, ignoring the stop sign completely. 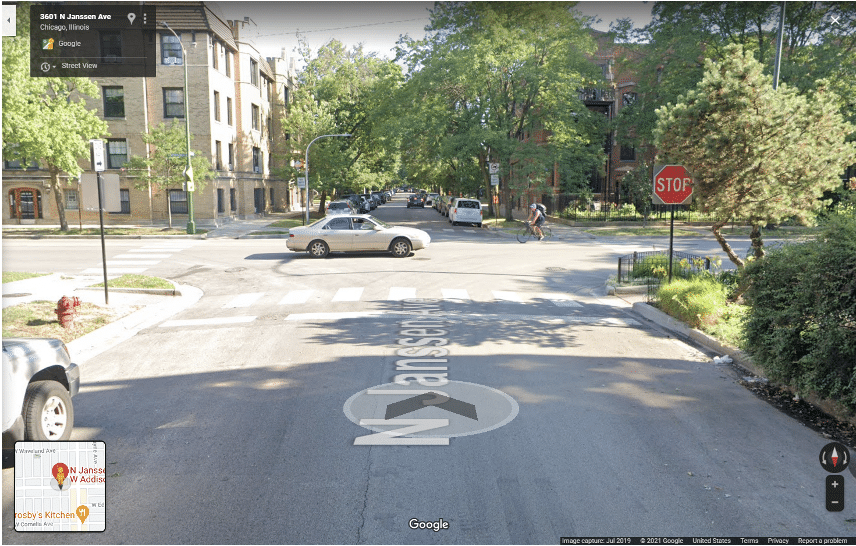 (Screenshot of intersection from Google Maps, showing stop sign: May 12, 2021.)

This is the only stop sign at the intersection, with good reason; those traveling on Addison have the right-of-way, and N. Janssen is a one-way street. As you can see, the stop sign is clearly visible, as is the crosswalk. The accident occurred at just after 6:00pm last night, and the sun set in Chicago at 8:00pm, meaning there was plenty of light to see.

Hit and run accidents are still on the rise

As we discussed in March, the number of hit-and-run accidents in Chicago is rising; in fact, it is rising all over the country. The data supplied by Cook County law enforcement cited six improper driving behaviors (AKA, “negligence”) as the lead causes of hit-and-run crashes; the first on the list was “disregarded road marking.” It appears, if the local residents are correct, that plenty of drivers are disregarding that stop sign and crosswalk, as well as failing to account for drivers traveling crossways on Addison. Instead of wondering why a young woman is in Illinois Masonic hospital being treated for critical injuries in a hit-and-run, we should be wondering why she isn’t the only one.

When Chicago launched its Vision Zero initiative, with the hopes of eliminating all serious injuries and fatalities on city roads by 2026, it focused on policy changes based on the data. It broke down victims by race, age, and type of vehicle, and demanded investment equity in street planning. It even had data to back up how dangerous intersections are, and boasted it was a leader following the Complete Streets model of urban planning.

And nowhere in the glossary brochure filled with bright headers and charts can you find the words “hit-and-run.” Why? Because in Chicago, most hit-and-run drivers get away with it.

We know this sounds cynical, and we don’t mean to demean the mean and women who work on these cases. After all, there are at least 8.5 million licensed drivers in Illinois, and at least 2.7 million people living in Chicago alone. Chicago PD has about 13,000 officers and some of the highest crime rates in the country, of which hit-and-runs are only a small fraction. We understand that logistically, if not dishearteningly, that not every hit-and-run driver can or will be caught. Police can’t just walk around looking for cars with dents and missing paint, hoping to get lucky.

But couldn’t we at least try to do something?

We need to include hit-and-run data in the Vision Zero initiative, because we need to address how many injuries and deaths are being caused in spite of the new policies that have been put in place. We need to start thinking about how we can make hit-and-runs impossible to commit. We need to see where they happen the most and look for patterns that make some intersections and roads more likely to have a hit-and-run. We need to look at things like:

We’re not urban planners and we’re not police, but we are the people the community turns to when they are hurt and scared. We know what kind of damages and losses people suffer when they’re injured in hit-and-runs, and when their loved ones are killed in them. We know what kind of hassle it is to deal with insurance, and how stressful that can be when you’re juggling medical bills and finding daycare and worried about keeping the roof over your head when you can’t work. We also know how hard it is to “go back to normal” when you keep replaying the crash in your head, over and over again, and the toll that can take every time you have to cross a street or pull out of a parking spot, or when you kids want to ride their bikes with their friends.

And we know it’s time that someone did SOMETHING about the scourge of hit-and-runs in Chicago. We hope you’ll join us in demanding better for our city and our community. And if you do need help after a hit-and-run accident, we hope you know that Gainsberg Law will be there to help you. Give us a call at 312-600-9585 or fill out our contact form to schedule your free consultation today.