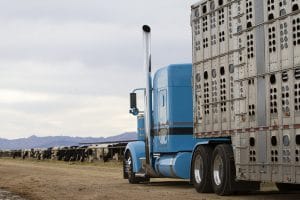 There’s nothing funny about drunk driving. It puts everyone in danger and causes thousands of deaths each year. But even we raised some eyebrows over a crash in Joliet on Tuesday that left about 16 cattle running around on I-80.

According to ABC 7, “Bradley E. Pate, 51, of Waynesboro, Virginia, was charged with driving under the influence of drugs and issued citations for failing to reduce speed to avoid an accident and improper lane usage after the cattle hauler he was driving went off the road and hit a disabled semitrailer just before 3:40 p.m. on eastbound I-80.” He also hit a Honda before the cattle spilled out of the trailer.

Pate suffered life-threatening injuries, and four cows died. The driver of the Honda was taken to a hospital, but their injuries were deemed “non-life threatening,” and the other dozen cattle were rounded up and taken to a safe location.

We know that it’s easy to laugh at the idea of cows trotting around I-80, and we admit: the video of them is pretty cute (if you think cows are cute, that is). That said, livestock trailer accidents happen more often than you think. In December 2021, a cattle hauler lost control of his rig and 18 cows escaped, also on I-80 (though it happened in Indiana, not Illinois). In January, a Wisconsin farmer lost three cows after the trailer door came loose and they fell out, and a tip-over in Oregon this March left 31 cows milling about on I-5. It happens often enough that a quick Google search of “cows on roads in US” will return over 9.3 million potential hits.

In short, there are a lot of cows on roads out there – but they’re not the only things making roads unsafe.

Types of cargo spills and road debris on Chicago roadways

What happened on I-80 this week is technically a cargo spill: a type of truck accident where objects fall out of/off of another vehicle and land in the road. Livestock spills may be the most interesting (unless you like a cold brew, in which case you might be horrified to learn how often beer spills into the road), but the most common types of debris from cargo spills include:

Of course, not all road debris is the result of a cargo spill; much of it comes directly from Mother Nature herself, collisions with other vehicles or objects, or from poor road maintenance. This can include:

The last major report on road debris-related accidents was compiled by the AAA Foundation in 2016, using data from 2011-2014. At the time, they found that “road debris was a factor in a total of more than 200,000 police-reported crashes [and] resulted in a total of approximately 39,000 injuries and 500 deaths.” We don’t know if the numbers have increased or decreased since then, but we can say for certain that they are still a major problem.

Why are cargo spills and road debris so dangerous?

The real danger of cargo spills, however, is their immediacy. Say you are traveling on I-80 at the posted speed limit of 55 mph during rush hour. You’re behind a dump truck carrying gravel. The truck hits a bump in the road and the gravel falls out of top and spills onto the roadway. You can’t swerve, and if you stop short you’ll be rear-ended, but if you keep going, one of two things will likely happen:

These same scenarios play out on roads all over the country, whether the cargo is rocks or metal pipes or chickens. Without any place to go, you’re at risk of being hit by falling debris or another vehicle.

Who is liable for a Chicago accident caused by spilled cargo?

Liability depends on a lot of factors. In many cases, the liability falls with the truck driver, the shipping company, or the trucking company, if one of them are responsible for securing the truck’s cargo and/or maintaining the truck. If the cargo spill is the result of a defective product – for example, if the latch breaks on a trailer because it’s defective, or if the soft top securing the cargo is faulty and rips – then the manufacturer may be liable.

In some cases, however, cargo spills lead to multi-vehicle accidents, and that’s where things can get tricky. If a truck spills liquid on the road which causes Car A to hydroplane, and Car A hits Car B and Car C, and Car B and Car C get pushed into different lanes and THEY hit Cars D and E, now we have a chain-reaction accident – and multiple insurance companies all pointing the finger at one another so they can avoid paying out claims.

Of course, all of this assumes that the crash happens in real time. What about when trucks spill cargo and then keep on truckin’, leaving the debris behind? Or when the debris is natural, like wet leaves or tree limbs? Now you may have a claim against the government in charge of that roadway, which is a whole other can of worms.

So what do you do? You call us. Gainsberg Law has represented Chicagoland clients in a wide range of accident and injury claims, including those against trucking companies and government agencies. You don’t have to go through this alone. Call 312-600-9585 or fill out our contact form and schedule your free consultation today.