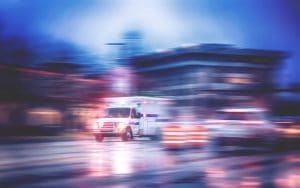 A high-speed collision on Saturday, September 12 has left one family in mourning, and four other people with injuries. The crash, which happened on I-294 just after noon, involved a driver who lost control of a Chevy Impala; the driver sideswiped one vehicle and then hit a concrete barrier in the median. The Impala, per ABC 7 News, “went airborne” over the median and hit three more vehicles.

A 64-year-old woman riding in a CRV was hit by the Impala, and then struck by a box truck. She died while in the hospital. Four people were injured, including the driver of the CRV and the Impala, both of whom were described as having “serious injuries,” per the Illinois State Police.

Why “airborne” cars are so dangerous

If you’ve watched an action movie in the last, oh, 50 years, you’re no stranger to the airborne vehicle. It makes for good spectacle in films, but the reality is much grimmer: an airborne car may be a multi-ton projectile that can cause deaths, serious injuries, and thousands of dollars in property damage. Sometimes, the vehicle can lodge itself into a building (called a “car incursion” accident); other times, it can hit multiple vehicles in a different lane, which is what happened on Saturday.

Speeding is the leading cause of accidents

In 2018, speeding accounted for 33.7% of all vehicle crashes in Illinois, 33.6% of all fatal crashes, and 38.2% of all crashes leading to injury. It is one of the leading causes, if not THE leading cause, of accident-related injury and death in Illinois. There are a lot of reasons for that, not the least of which includes people who think they can go a few miles over the speed limit and still be safe.

The physics behind speeding proves otherwise; the faster you go, the more impact a collision has. Even a low-speed collision can cause serious injuries like whiplash and cracked or slipped disks; a high-speed impact can lead to life-altering injuries, including paralysis, traumatic brain injury, and damage to the abdominal muscles or lungs. In many cases, it leads to death, which is, tragically, is also what happened this Saturday.

Our hearts go out to the family of the driver who died. We hope there is more information available soon, so that they may find some semblance of peace.