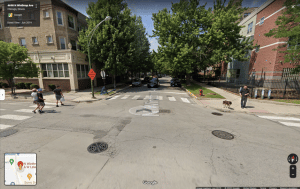 If you spend any time on highways, you know that semi-trucks rule the roads. They’re big, they’re heavy, and they should be given a wide berth on interstates and freeways. After all, there are specific federal guidelines in place that ensure 18-wheelers can get from point A to point B on highways.

Things change when you get on local roads, though. There’s no place more dangerous for a semi-truck than an urban roadway, a lesson we’re still reeling from today. Yesterday morning, ABC News 7 reports, a semi clipped a woman on a bike ride with her 3-year-old daughter. The child was dragged by the semi while her father frantically beat on the side of the truck, begging the driver to stop. The little girl didn’t make it.

We are heartbroken. It was a horrific, terrible accident, but it still ended up with a grieving family. And it was entirely preventable.

This truck accident NEVER should have happened

The 1100-block of West Leland Avenue has bikes lanes. They’re not the safest (we’re going to come back to this), but at least they exist, which is more than we can say for a lot of the city. ComEd was doing some work in the area, and the truck was parked in the bike lane, which meant the mother had no choice but to use the street. (It’s illegal to ride a bike on sidewalks in Chicago.)

We have three questions.

We are enraged about this fatal truck accident. If the bike lane hadn’t been blocked, it could have been avoided. If there wasn’t a semi in the middle of West Leland, likely wouldn’t have happened.

One of the Mayor’s campaign promises was to increase the amount of bike lane mileage in the city. In September last year, the Chicago Department of Transportation (CDOT) said it would be spending $17 million over the next two years to expand bike lanes to fulfill this promise, which is great; it’s just that it should have been done by now.

There are around 360 miles of bike lanes in the city now, but according to Block Club Chicago, this is “a far cry from the 645-mile network a 2012 plan envisioned the city would have by 2020. And just more than 25 miles of those lanes are physically separated from car traffic, a fraction of the 100-mile goal city officials vowed to build by 2015.”

It’s that 25 miles we want to really focus on right now. In an interview with ABC 7 News, 46th Ward Alderman James Cappleman said that “even before the accident there’s been talk of adding a ‘bump out’ to that stretch of Leland Avenue.” The Active Transportation Alliance told the news that “bike lanes aren’t enough sometimes because of how busy city streets are.” And if there are going to be heavy-duty commercial trucks on urban streets, then bike safety needs much more attention.

But it’s not as simple as just adding bike lanes or updating existing lanes to make them safer. Larger, safer bike lanes mean taking up more roadways, which means less room for vehicles – not to mention the added headache of ongoing construction on already-crowded streets. All of this costs money, too, and CDOT’s new release about that budget only discussed new lanes. It didn’t say anything about updating the ones that currently exist.

And you know what the irony is? Everyone knows Leland is a dangerous spot. A two-year old was struck and killed by an SUV around the same are on June 2nd. A 44-year-old woman was killed in a crosswalk in April about a half mile away. And last year, Leland Ave got the “Slow Street” treatment. per Streets Blog Chicago:

Last year Leland had a “Slow Street” treatment during the warmer months between Lincoln Avenue (2300 W.) and Sheridan Road (1000 W.), including the blocks where today’s crash occurred. That strategy involved the installation of barricades and traffic barrels that further calmed traffic and discouraged non-local car trips, making it safer to walk and bike in the street. While the treatment was credited with an 85 percent increase in bike traffic on Leland, the Slow Street was dismantled three months early in response to complaints from residents that it was confusing for drivers. It’s not clear whether the Slow Street treatment might have made a difference in preventing today’s death. (Emphasis added)

We are sick over this incident. Two parents will live with their worst nightmare forever because the same residents wringing their hands over safety complained to the city about how their solution was “confusing.”

It’s so very frustrating, because this is untenable: we cannot have 19th and 20th century street design for a 21st century life. We just can’t. Temporary and stop-gap measures aren’t going to work; the whole city needs an overhaul. And while we are thrilled that the new bike lanes (when we finally get them) will be designed with modern-day needs in mind, there are a lot of families at risk of suffering the same kinds of tragic losses.

So – what can we do? Aside from advocating for better bike lanes and better infrastructure, and accepting that the cost of keeping cyclists and pedestrians safe is making things a little less easy for people in cars, all we can really do it be as careful and cautious as possible. Wear a helmet. Use headlamps and learn your hand signals (or invest in signal lights). If you cannot use the bike lane and the street has cars parked along its side, perhaps walk your bike along the sidewalk until you reach a safer spot to ride. Always look both ways before crossing intersections, and only cross in crosswalks.

Our hearts go out to the family of Lily Grace. We can only hope they find some peace in the days to come, and some justice for their daughter.

Gainsberg Law serves injury victims throughout the Greater Chicagoland area. To learn more about our services, or to schedule a free consultation with a Chicago personal injury lawyer, please call 312-600-9585, or fill out our contact form.